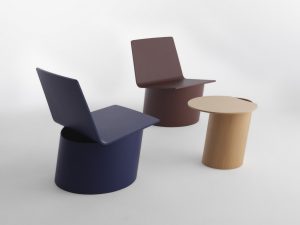 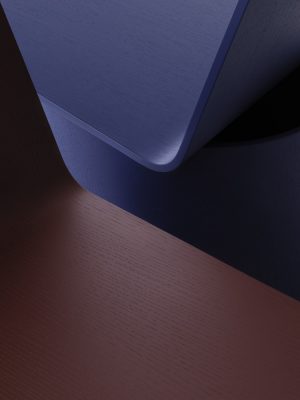 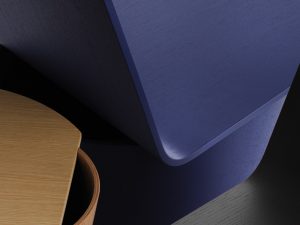 Bias began with the idea of a fluttering sheet of paper resting gracefully on a sloping cylindrical shape. The resulting union of these two geometric elements; an inclined cylinder and a thin, flat timber circle resulted in the Bias occasional tables. Maintaining the distinctive angled form, the ‘flat sheet’ has now been shaped into a three-dimensional curved shell to form the Bias lounge chair.

Its outstanding originality and innovation are inspired by new ergonomic approaches based on modern lifestyles, while the overall simplicity and minimalist profile evokes images of Finnish plywood chairs. The combination of simple, clean lines with the angled base creates a dynamic, sculptural effect making Bias more than capable of standing alone in living spaces or used in lounging spaces within the contract market.

Skilled handcrafting of the Oak moulded plywood, without any visible joints, translates into a unique design aesthetic, which is also attributed to the open grain finishing that represents the simplicity of wood.

The Bias occasional tables are available in two sizes and can be used independently or nested together to create a visual display. The Bias lounge is available with an optional thin profile seat pad, made from high-density foam for superior comfort, which can be upholstered in both fabric or leather.